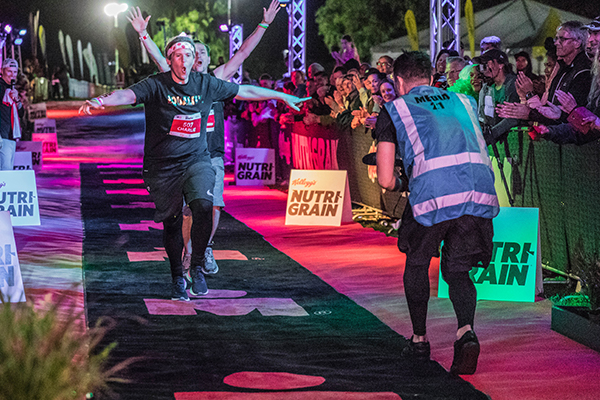 Charlie “Rocket” Jabaley’s story: Inspire your audience with Jabaley as a Grammy-Award Winner, tumer survivor and a inspirational NIKE’s athlete.

Charlie Jabaley a music management mogul. Each time a door would seemingly close for Charlie, a bigger one would fly open right behind it.

“Charlie Rocket” set his sights squarely on Nike. He asked himself, “What do Nike athletes have?” Well, for one thing, commercials. So he decided to make one. He produced a video, explicitly calling out the brand and even leaving a place for their logo to jump on board as a sponsor.

A life-long junk food addict, Charlie had swelled to over 300 pounds by the age of 29. He had tried countless diets, but always gained the weight right back — plus a little extra. He even began running, completing three marathons with his best friend. But, due to rewarding those training sessions with shame-inducing binges, Charlie continued to pack the pounds and his health rapidly declined.

A brain tumor he had lived with since childhood started growing. It began to wrap around Charlie’s carotid artery and left optic nerve, with doctors telling him it could corrode the top of his spinal cord. Charlie needed to fix the root of his problem – his relationship with food and stress.

“And that was the point that I knew everything in my life had to change because I felt like I was facing an early death,” he says.  “I went back, and I walked away from the music industry, completely. I said, ‘I’m going to follow my dream and be an athlete.’

Weighing over 300 pounds, Charlie Jabaley had tried to lose the weight several times without success. One of his tactics was trying to run the weight off after being challenged to a marathon by his best friend.

Three marathons later, the weight wasn’t the only thing that was creeping back on; a lifelong brain tumor had started to grow, wrapping itself around his coronary artery and left optic nerve. He needed a bold solution—one that would guarantee the lifestyle change he so desperately needed to survive.

In the recap of his race experience, Charlie describes the moment he learned he was in last place on the bike and in danger of missing the cut-off to begin the run. Making it just barely into the last leg of the race, the once sauntering Jabaley (he literally danced his way to T1) struggled to find the strength to high-five his supporters along the way. He was hitting the wall. “When you’re at that wall, sometimes it isn’t just in front of you, it’s all around you,” he says. But rock bottom was just what he needed to rise up and conquer his ultimate challenge. He pulled through for a finishing time of 16:41 hours, just under the 17-hour cutoff.

With his first Ironman under his belt (a tighter belt these days due to losing 125 pounds since inking that contract with himself), Charlie has a renewed sense in himself and his purpose.

“I don’t miss my old life,” he says of his days as a music exec. “I had a big business and I made a lot of money, but it was the extreme of working hard. I didn’t go partying. I was dealing with food addiction and anxiety. I wasn’t in a good place. With Ironman, I just applied that extreme to my health—to something better for me. My goal was to finish and to show the world that a regular guy could finish an IRONMAN.”

Charlie understands that the essence of an organization is recorded in this message, and knows how to cultivate a corporate story that will capture audiences and bring the written story to life.

Focused on the empowerment of entrepreneurs, millennials, or anyone that needs a hard push to recognize their dreams, Charlie knows how to captivate, motivate, inspire and challenge corporate audiences to communicate their brand story with the same energy that drove him to push through failure after failure and achieve massive success as the founding partner of multimillion-dollar entertainment company, along with several other e-commerce brands.

If there is one thing that Charlie Rocket understands, it’s the power of inspiration. Corporate storytelling is an inspiring means of communication that involves people in the messaging of your organization –  removing obstacles and transcending barriers.

People need to be part of a larger whole and contribute to a shared goal. Storytelling can reinforce the corporate culture or can steer an organization through a process of positive change.